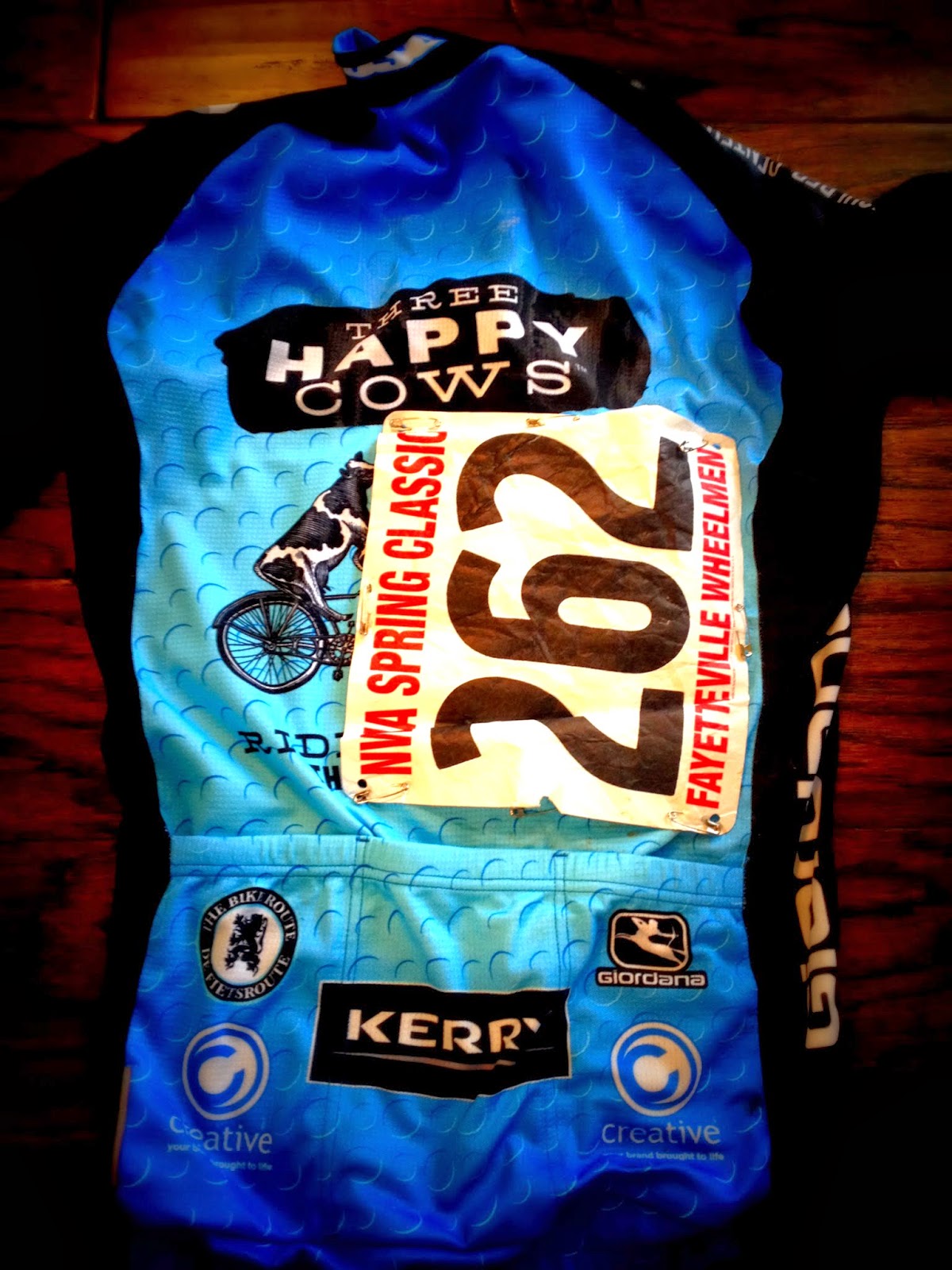 Superb weather + classic race course = Ozark goodness. 72 miles on flat, to rolling scenic roads. Wind was the major protagonist of the day. I have always (except last year) really enjoyed this race. It's a well run event and the proceeds go to the Fayetteville Wheelmen/Athlete Forward U23/junior development program. Three Happy Cows Cycling had eleven guys in the category 3 race. Our team plans included me trying to get away early. Received & executed...I set off at the first turn after neutral. Tyler K from Competitive Industries came across and jumped right in. The gap was solid. Eventually we could see a small group coming across and I knew at least one of my teammates would be in tow. Tyler and I decided to ease up. The group consisted of Scott W & Danny H two of my teammates, two Walmart, one Tulsa Wheelmen & one Air Assurance (8 total). This was a good mixture of teams so immediately I knew it could go the distance. My 'new' teammates for the time being started working well together and before we knew it the peloton was long gone. Another reason bicycle racing is so interesting. Rivals work together to increase the chances of a smaller group staying away. This puts the responsibility on any team not represented to bring it back. Near the end of the first lap my teammate Scott W rolled up and said a small group was coming across. Again, I knew at least one of our teammates would be in tow. We (3HC) started easing off the gas half a notch. Sure enough about midway on the second lap one Soundpony, one Tulsa Wheelmen and my teammate Curtis L made it across. With Soundpony almost all the teams were represented. Four 3HC's in the break was a solid position to be in. Then Curtis rolled up and said his front tire was flat. So I gave him my wheel. He's been riding lights out lately. I got passed shortly thereafter by two more of my teammates who were trying to go across. It was a long while before I saw the peloton/wheel truck. My teammate Nathan B dropped back and turned himself inside out to get me back on. To be honest I didn't think we were going to make it and I dreaded the thought of riding by myself in the wind. One selfless act leading to another. Whether you are in the winning break or back in the bunch it's pretty cool how teamwork and sacrifice play out in road racing. That's one of the reasons I enjoy this sport so much. Just that experience alone left me satisfied. Mark G and Michael K did make it across. As far as the winning break goes Scott W took 2nd, Curtis L 4th, Danny H 7th and Michael K 10th. The boys said they made some tactical mistakes on the last lap. Nutrition and hydration also played a big part but all in all we are a bunch of Happy Cows. Congrats to Duncan W (Walmart Cycling Team) on a well deserved win and thanks to the good folks who put on a great race. 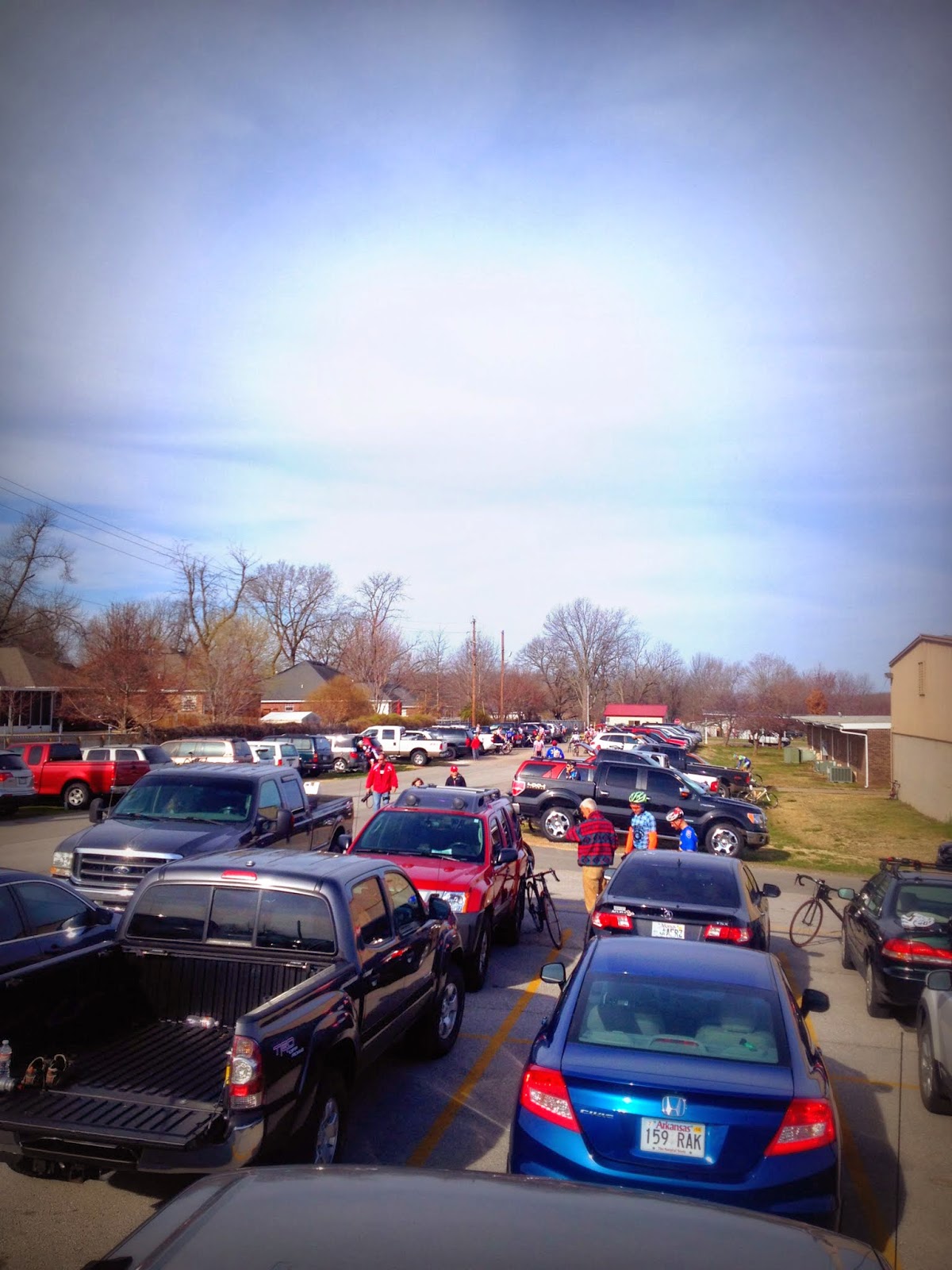 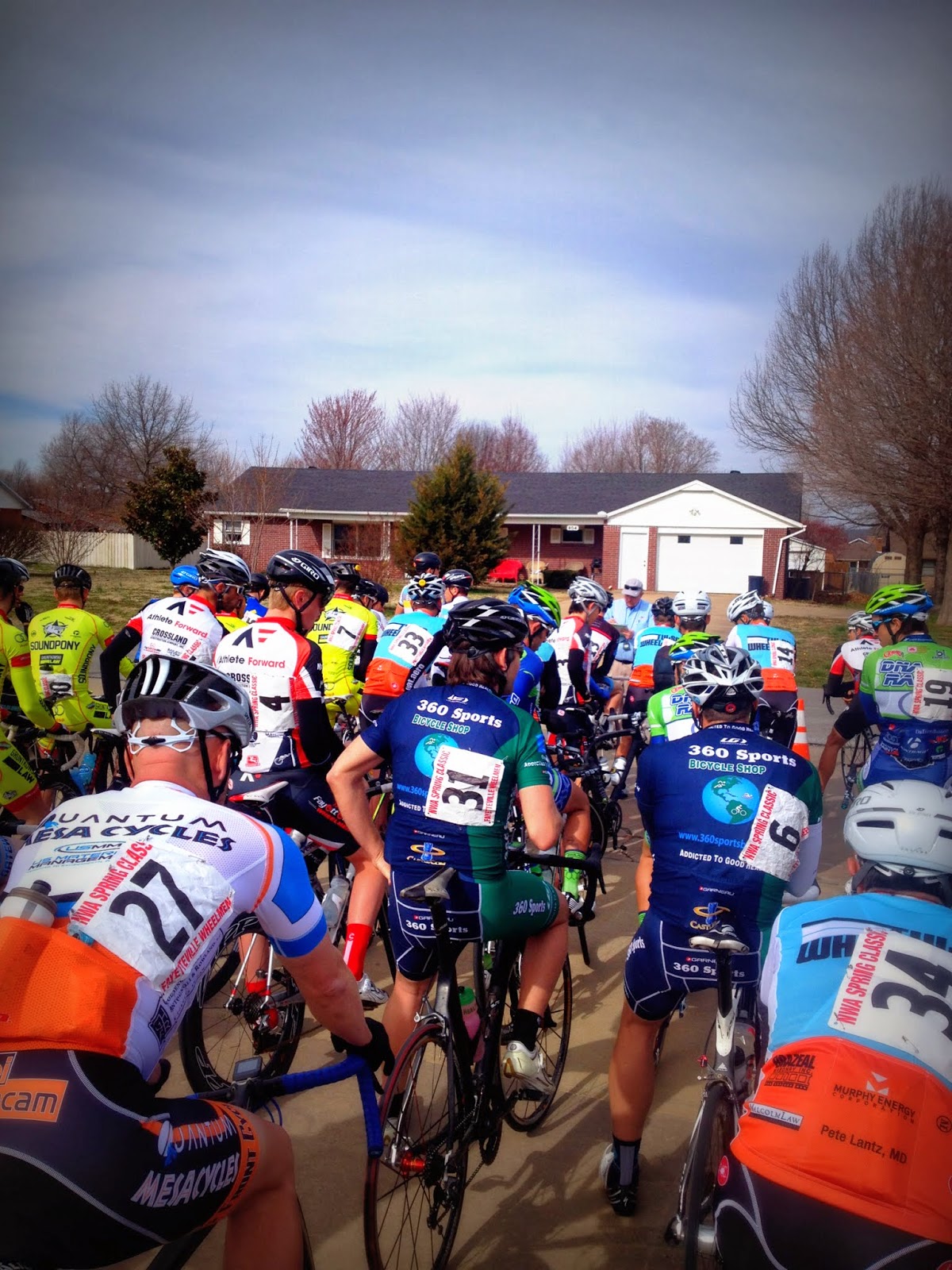 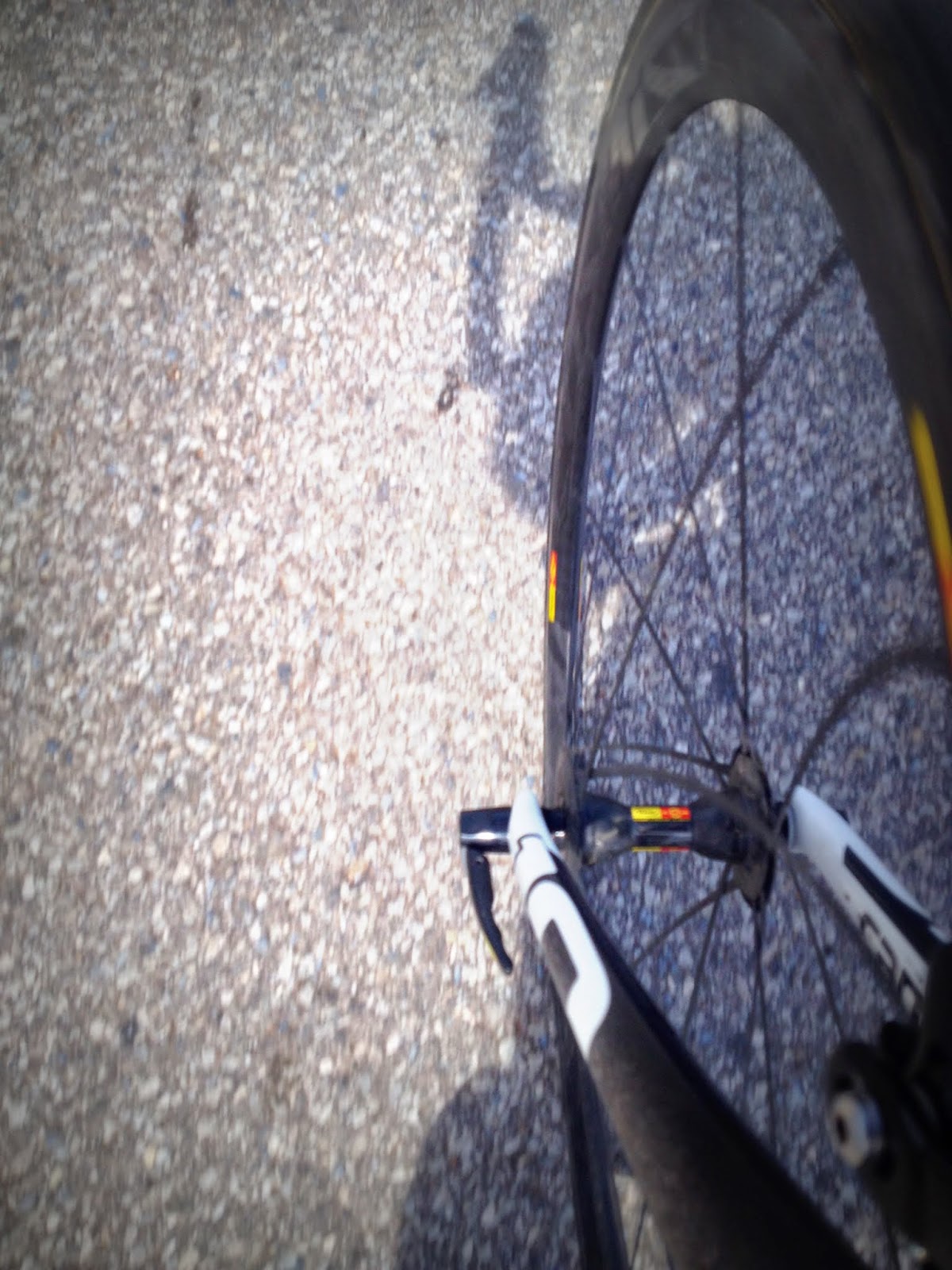 Rolling on a flat tubular. 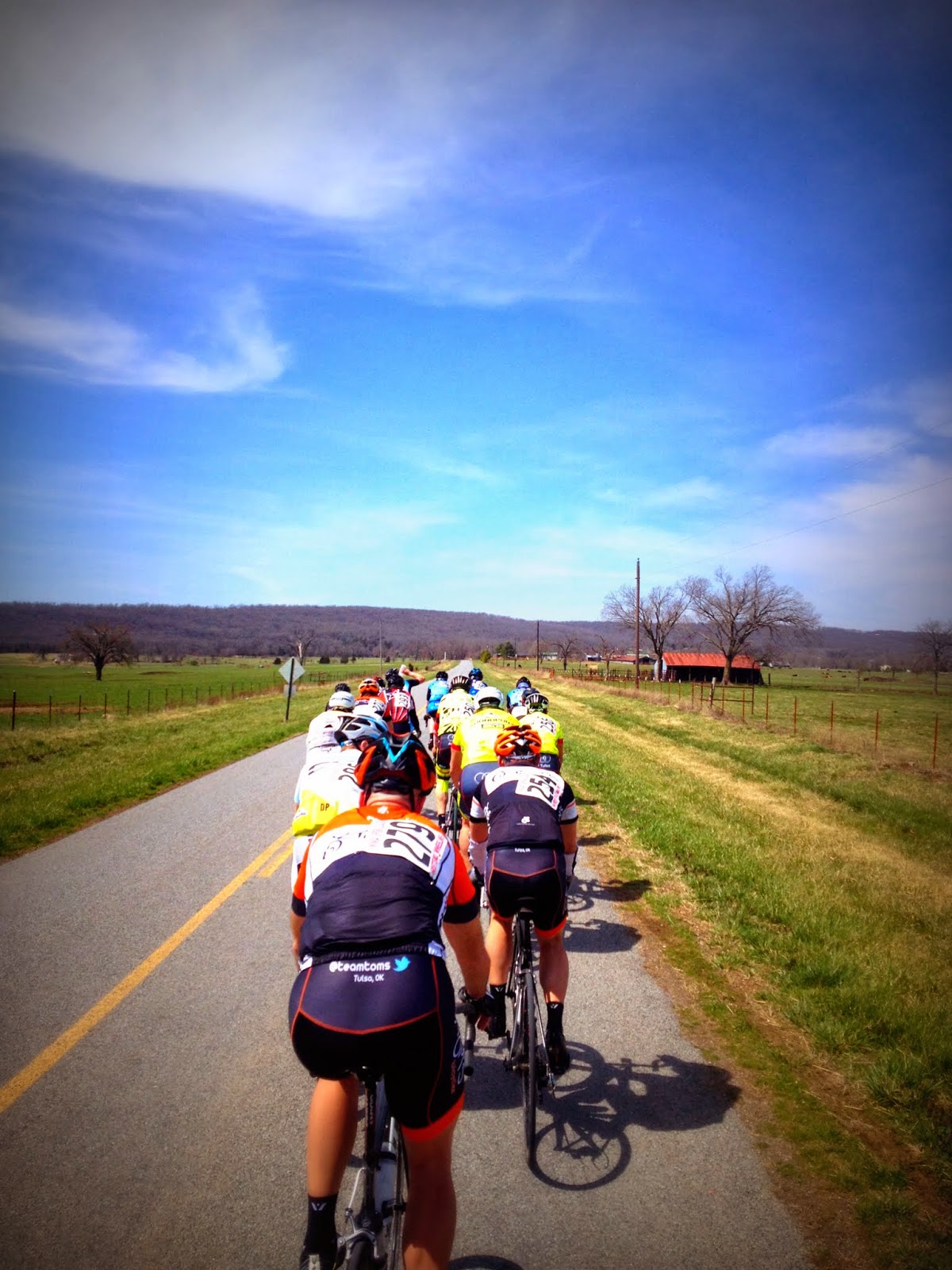 Back with the bunch.

Classic for a classic. Let's Eat!