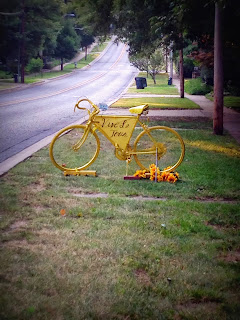 The 100th running of Le Tour is coming to close. It did not disappoint or sort of did, then really didn't but then did again. One day the tour was won and the next not so fast then on another day it looked promising again and then on another day it was put in the bag. Now the deal looks to be sealed. The men in black are in control not so much because team dominance but because of 1.5 men. I thought all along with the rest of the world that it was Froome's to lose. What impresses me is the attempts from the contenders pretenders to knock the tall lanky man with 170mm cranks off his rhythm. He is confident, cool and collected and has a well rounded game ta boot. Obviously he has done the work to be at his best in July. Even after today's stage there is still a sliver of hope for some great bike racing to be had. I'm confident that Bjarne Riis' team will make a big splash with his two headed snake at a key moment in the coming days. It will be interesting to say the least. Now, if we can get the 'littles' Nairo & Joaquim to launch their long range missiles we might see some spectacular fireworks or better yet interesting tactical scenarios. The time trial results showed today that the contenders pretenders have planned all along to be good in the third week. Is it too little too late? Let's hope that the Saxo's are staying in the same hotel as the Movistar's and Katusha's this evening.

I've decided I have nothing against Froome. But to do this I must consciously put aside my suspicions. That's a sad state to be in but those are the times.

My prediction is we will see Joaquim pull out the stops using the steepest pitches and catapult himself onto yet another grand tour podium. Perhaps he will collaborate with Nairo.

We will also 'get' to see elbows and knees out and that 145 cadence again. Winning.

Just a reminder. I'm a mediocre category 3 at best. So, take it for what it's worth and thanks for checking in.
Posted by Robin G at 1:31 PM